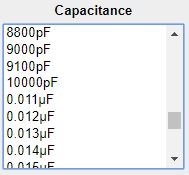 Introduction
The Celtic Engineer is a weekly newsletter produced by Celtic Engineering Solutions. We hope you enjoy it. If you have any suggestions for topics, would like to give feedback or want your email added to the distribution list please send an email to [email protected]
A nanofarad you say?
For years I have refused to use the word nanofarad. Capacitors are sold as picofarads 1-10,000, and microfarads 0.011-980,000. Go check on Digi-Key if you don’t believe me. Then there are Farad sized caps, but that is a more recent development. That is just the way it is and it is utterly ridiculous to refer to the size using mili- or nano-, absurd! Where is my horse?
It is funny how language gets molded to fit our needs. In the early 1930’s you could buy a 0.0002mfd (microfarad) cap, which in the late 1930’s was referred to as a 200mmfd – that is a micro-micro farad. In the 1940’s it was sold as a 200pf (picofarad). Finally, things have gotten straightened out. But no, a 0.001mfd cap in the early 1930’s was common. It changed to 1000mmf in the late 1930’s and 1000pf in the 1940’s.
A large condenser manufacturer of the early 1900’s, because the term capacitor was not used until the 1950’s, refused to label their condenser with anything else but picofarads. In fact, the Philips company would refer to a 0.1uF cap as a 100k, meaning 100,000 picofarads. No doubt, they sold the majority of their caps in values ranging from 1pf to 1,000,000 pfs. (Valve Radio and Audio Repair Handbook, Chas Miller 2000).
Hey kid, you want a puff?
The abbreviation pfs, for picofarad, lead to the colloquial term ‘puffs.’ You will still hear engineers, usually older ones, refer to a 1000 puff cap. Only a ‘square’ uses the entire term. Man, oh man!
I would not be at all surprised to find that a rival manufacturer, that produced larger caps, say 0.01uF to 1000uF decided that they would only use the term uF (microfarad) to distinguish themselves.
Not in Merica
Around the time that people stopped using Leyden Jars and started calling condensers capacitors, the 1950’s, the term nanofarad (abbreviated nf) started to be used. It did not last. In most of the rest of the world, people use the metric system so prefixes like pico-, nano-, mili-, kilo-, and mega- were easily adopted. But in the USA, where a stone is a unit of mass being equal to about 14 pounds. And a ‘stone’s throw’ is how far you can throw said mass, being not far, we stick with tried and true things like the imperial system of measurements. In 1866 the US Congress authorized the use of the metric system, but we have adopted a wait and see attitude, not wanting to jump into something that might not catch on. That being said we stick with what we know. So, if it’s the term microfarad we will get as much mileage out of that term as we can. Hence the term micro-micro farad for picofarad and mili-micro farad (which never really caught on either) for nanofarad.
Oh, geez Rick!
So, with great reluctance I am giving up windmill chasing. And like Ahab, I am going to give up my long and strongly held conviction. I will finally accept the term nanofarad. I have slowly started to convert my capacitor library over to SI units and abandon the use of fractional farads. Of course, we all know that chokes, coils, um, inductors, yes. Inductors only come in nanohenries and millihenries. So that should balance things out.
Final thoughts
This newsletter is sponsored by Celtic Engineering Solutions LLC, a design engineering firm based out of West Jordan, Utah, which can be found on the web at: www.celticengineeringsolutions.com. You can find the newsletter on the company blog, LinkedIn or in your inbox by subscribing. Send your emails to The Celtic Engineer at: [email protected], with the subject line SUBSCRIBE.