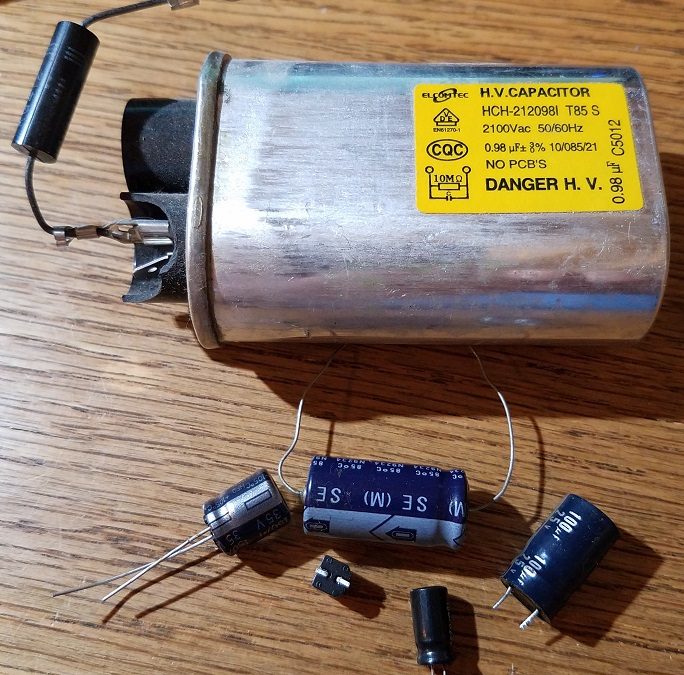 Happy Valentine’s Day
Saint Valentine’s Day is a cultural, commercial and religious holiday celebrating romantic love. While there have been several people who have identified as Valentine, the one that is the most interesting, subjectively speaking, is St. Valentine of Rome. He or they, lived in the 3rd Century and was imprisoned and later killed for performing weddings for soldiers, who were forbidden to marry, and for ministering to Christians persecuted under the Roman Empire. He is said to have restored the sight a blind girl, the daughter of his judge, and just before his execution he wrote her a letter and signed it “Your Valentine,” setting off a long tradition of sending cards on the day of his execution, February 14th.
And that takes us directly to Aluminum Electrolytic Capacitors (AEC). Sorry, was that a bumpy transition? Well considering the number of these small metal cans we have used in our devices over the past 100 years, I can only assume when have a great love for them. And their propensity to explode or die in some manner, thus rendering our device useless seams to fit with the death that is inherent in the St. Valentines legends.

What you got?
AEC’s are manufactured in values from 0.1µF up to 2,700,000µF (yes that is 2.7F). The voltage range is from 4V up to 630V. They are made in three flavors, liquid or wet, solid manganese dioxide and solid polymer. The wet variety is the most prevalent because it is also the cheapest and the one you have most often come across. The wet is an electrolyte. The aluminum is formed into two sheets separated by a spacer, usually made of paper that is impregnated with a liquid or gel electrolyte. One side is made rough and coated in an oxide layer. This increases the total surface area. The second sheet naturally oxidizes which sets up a condition where there are two series capacitors that make up the device. The one created by the roughed surface, the anode, is at least 10 time smaller than the cathode. The total capacitance is then determined mostly by the lower capacitance produce by the anode. I will leave that explanation as an exercise for the student.

Why is the electrolyte important?
The liquid must perform a number of tasks to make a good capacitor. In addition to the main property of being an ion-conductive liquid, it being a liquid it is able to mesh well with the rough surface of the oxide layer on the anode. It must be chemically stable, don’t want to have a little chemical plant in our radios. It must have a high flash point to prevent fires. It cannot react with aluminum, must be environmentally safe and have a low viscosity. Additionally, it should be a source of oxygen that allows for the self-healing properties of these caps. That is a lot to ask of one liquid, which is why most manufacturers have a propriety formulation that they claim, perhaps rightfully so, makes their caps better than their competitors.

What do all the ++++’s mean?
If you have ever hooked up an electrolytic cap backwards you will appreciate the high flash point of the electrolyte. These caps are polarized, meaning they have a positive (marked with a bunch of +’s)_and a negative side (occasionally marked with a bunch of –‘s). Putting them in backwards causes rapid heat buildup, which leads to steam or other gases. Have you ever wondered why there is an X etched into the top of the can? It is called a burst disk. It is there so that when the pressure builds up it can direct the ensuing explosion. Which is usually reminiscent of a gun shot.
I watched someone sitting over their circuit when they turned it on and discovered an AEC was in backwards. Fortunately, they were not hurt, except pride. They could not get away from the circuit fast enough and fell over their chair backwards. It is really hard not to laugh in those circumstances. If this was you and you are reading this, I am really sorry about laughing, really.

Nothing good lasts forever
Remember when I said there were three types of AEC’s? The cheapest being the most prevalent. Well it is also the one most likely to stop working. As it heats up it, it loses some of its dielectric. They dry out over time. This contributes to their lifetime. As this happens the capacitance changes. Eventually they look like an open circuit.
Another failure mode is corrosion. This can come from contamination. In early caps the contamination was from chlorine which led to the breakdown of the oxide layer on the aluminum. As these caps became better and better, they lasted for a longer time allowing other failure modes to be discovered. One was water contamination. Both of these can lead to high leakage currents.

I have a friend who has been very successful at resurrecting electronic devices by replacing the AEC’s on the power supplies. Since these are the most likely to fail, replacing them is a good bet if you want to fix the device.

Surface mount Electrolytics
The world has moved from through-hole to surface mount, just in case you were not paying attention. The solution for AEC’s is a small rectangular plate at the bottom of the can and two tiny little mounting pads. If your product is going to sit on someone’s desk, you can stop reading now. If it is going to see any shock or vibration, you are in for a serious case of heart burn. Mechanically speaking this is a very bad arrangement. You have a large mass connected to a very small PCB pad. As shock and vibration is express upon our electronics we have a situation where a moment is created in a sheer direction to the surface of the PCB. Translation – the component will rip the pads right off the board! The cure is simple, either go back to through hole or you must glue and/or stake your caps. Doing this really does fix the problem, but thinking you can just solder them down and forget them is asking for problems.

Final thoughts
This newsletter is sponsored by Celtic Engineering Solutions LLC, a design engineering firm based out of West Jordan, Utah, which can be found on the web at: www.celticengineeringsolutions.com. You can find the newsletter on the company blog, LinkedIn or in your inbox by subscribing. Send your emails to The Celtic Engineer at: [email protected], with the subject line SUBSCRIBE.

P.S. I was contacted by Special Chem The materials Selection Platform. They suggested posting a link to Automatic Materials, Inc. a leader in polymer-based self-healing microencapsulated technology.  I hope you find it useful.