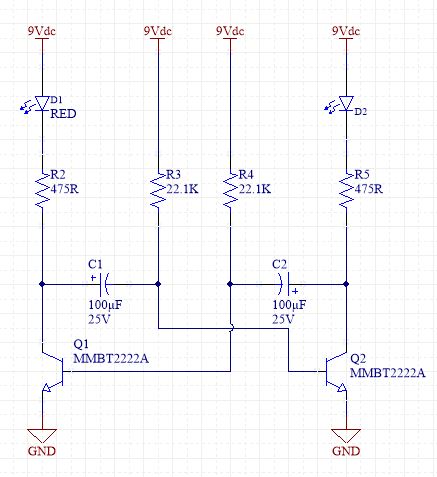 In an engineering group, everyone wants to have at the problem and generating a selection of possible solutions is not a problem. If you are the only engineer in a company this can be more of a challenge. It is often easy to see a solution and jump on it without giving much thought to other ways of doing things. It is my opinion that is why forums are so popular.

Simple is good
There are currently about 30 LED’s listed on Digi-Key that blink. They come in all sorts of colors. I was a bit surprised to find them all in the T-1 package. I would have thought there would be some in surface mount packages. In any event, you will connect them up like any other LED, with a current limiting resistor and they will happily blink away at some low frequency near 1 Hz.

He is a bit unstable
Sometimes unstable is good, at least when you are talking about a circuit. The Astable Multivibrator consists of 4 resistors, two capacitors and two transistors. This circuit has two oscillators that affect each other. When one is on the other is off. There are two RC time-constants. This allows you to affect both the frequency of oscillation and the duty cycle of the waveform. There are two outputs. You can think of them as Q and Ǭ. These square wave outputs can be used to drive an LED circuit or if you are a little clever, you can insert the LED right into one, or both, of the oscillators.

The Contrarian
You can use an inverter gate (either an unused gate from a multi-gate chip, or a single gate chip), a resistor and a capacitor to flash an LED. The cap is tied to the input and ground. The resistor is tied from the output to the input. You also tie a resistor and LED in series to ground. When the gate is high the LED is on. Presumably this is when the voltage on the cap is low (because if the output of the gate is high the input must be low). The feedback resistor will supply current to the capacitor. When the voltage on the cap (and the input of the gate) are above the upper critical level, the output of the gate will go low and the LED will go off. The charge on the cap will now slowly drain off through the feedback resistor until it is below the lower critical level and the gate output will go high starting the cycle over again.

How many 5’s in 555?
In 1971 Hans Camenzind designed an 8-pin chip for the Signetics company that became known as the 555-timer chip. It can act as an astable circuit (see above), a monostable circuit (a one shot) or a bistable (flip-flop). I can’t imagine anyone who was interested in electronics in the 1970’s and 1980’s who has not played with one of these versatile chips. In 1972 there were 12 companies that made them. There are also other package varieties, the 556 which has two circuits an the 558/559 which have 4 timers on one chip.

Why not just hook it to a PC?
Ok, using a PC might be overkill, but it is possible. More likely you could hook your LED to a small Microcontroller. MCU’s have timers that can be used to toggle a GPIO pin and turn an LED on and off. It might seam a bit silly to have an MCU just to turn an LED on an off, then again. Some small 8-bit MCU require a single decoupling cap. The cost is just pennies. When you consider how many parts you need to set up a 555 timer, the time and the real estate on your board, you might just consider setting up an MCU for the sole purpose of blinking that LED.

Now if you already have an MCU on your board for something else using it to blink an LED has multiple purposes. If it is blinking, then clearly the circuit/power is on. Also, if the LED is blinking, then your code is probably still running. In single threaded MCU code, if the MCU gets stuck the LED will not blink, probably. Now there are ways you can get it to blink even if it is backed into a corner. And if your MCU has a watchdog timer that you haven’t wisely turned off already that could affect your results, but in general it is a good indication that the MCU is functioning properly.

Bi-metallic strip
No, this is not a gender reference. A bi-metallic strip is made of two layers of metal that have different rates of thermal expansion. When a current is run through it, the metal heats up. One layer expands more than the other causing the strip to bend or curl. They are usually arranged with the tip of the strip resting against a contact. When the spring heats up the contact open, current ceases to flow so the strip cools down and the contact closes, rinse and repeat. Does this sound ridiculous and impractical? This is actually how most car turn signals work and why you hear that annoying clicking noise.

You want to use a relay?
You can actually flash an LED with a relay. This is done by placing a capacitor across the coil. You also need to place a resistor in series with the relay. This will slow down the charging a bit, otherwise it might switch so fast you can’t see it and you will quickly wear out your relay. When the cap is charged, the relay will energize and the LED will turn on. The capacitor will keep the relay energized for a short period of time and then close. The cycle repeats.

That is it. There are no other ways that you can possibly flash an LED! Right, pull the other one. I should just leave it like that to see how many of you write in and tell me other ways you can flash the good old LED.