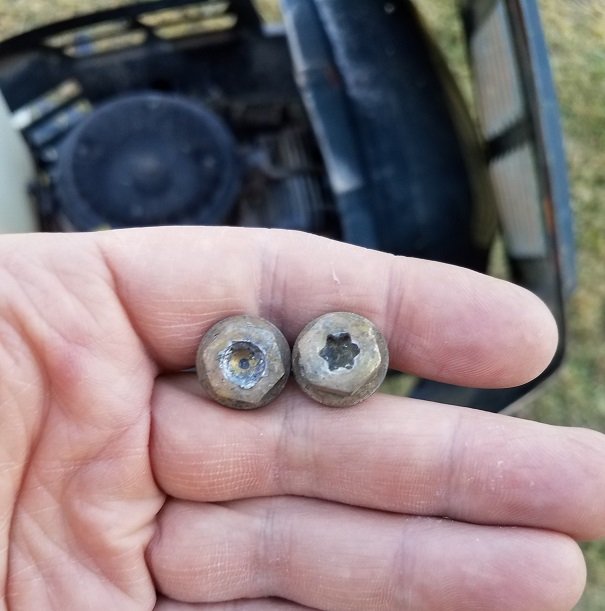 Mistakes
I want to start by telling you about a mistake I made this week. That may surprise you. I remember owning up to a mistake as a young engineer and my colleagues were shocked that I would admit to having made the mistake. They felt it was a bad idea and could be career limiting. So why am I doing it again? I have three reasons for talking to you about mistakes. Here is the first reason, we all make mistakes it is part of being human. If you come across someone who won’t admit to making mistakes, they are not only lying to you, they are lying to themselves as well. Have as little to do with them as possible.

The Lawn Mower
I found myself removing the starter motor on my lawn mower this week. It was in an awkward location and it had a Torx head. I don’t use them very often, but I like tools so I had a set of drivers on hand. To get the first fastener out I had to come in at a bit of and angle but I got it out. I was actually using the wrong size Torx but because of the angle I was successful. The second one was straight on. I started to strip out the teeth before I discovered the problem. When I switched to the correct size, I finished stripping out the teeth. The little guy was not letting go. I began to panic. I pulled the side panel off of the mower and contemplated drilling out the bolt. That would get the motor out but I would be left with a threaded stem in the motor and that might be hard to remove. I got my Easyouts and a sledge hammer. I was able to set the Easyout 3 times before I had made the recess (formerly Torx head) perfectly smooth. I won’t bore you with details like how far into the engine the bolt was and that it was hard to see, because if you will remember, I have already removed one of the fasteners so those would just be poor excuses. By now you are either yelling at he screen, laughing your ass off or you haven’t seen it yet. If you haven’t go back and look at the picture again.

The nature of the beast
The second reason I am talking about mistakes it that engineering is fraught with them. That may sound strange. The most technologically advanced things were designed by engineers, so what is this talk about mistakes? If you are contemplating going into engineering, or are an engineer who hates making mistakes, you might consider a career in accounting. Engineering is not going to be good for you.

Don’t get me wrong, there are two kinds of mistakes. There are mistakes that are made by careless, or lazy people and then there are all the other mistakes. Unless you are working on a project where, “Failure is not an option,” you are going to make mistakes. It is the nature of our field. In fact, if you are not making mistakes, you are probably costing your company money. Yes, you read that correctly. Being so careful that you don’t make mistakes takes time, a lot of it and resources. This all equates to money.

The best way to proceed is to be careful. Do the best job you can. Review the design and think about it from several angles. Have others review your design. Then make the thing and find the mistakes. I guarantee they are there, you just need to find them.

Astronauts need air?
I have worked with several engineers over the year who stand out. If they had worked on the Apollo program the rocket would be on the launch pad the astronauts would be suited up and he (or she) would say, “Oh, you mean they will need to breath on the way to the moon?” I am sure you have met this engineer. They are hyper-focused individuals who can only see the exact thing they are working on. They don’t look at the big picture. They don’t consider how their work affects others. They don’t care about other parts of the project beside the one they are working on. These are not bad engineers, but they make poor system engineers. When you find these people being given system like task, rather than shaking your head and saying, “What an idiot,” turn around and ask why this person’s manager is asking them to do something that they are not at all suited to do.

We all have moments where we are so focused on the striped Torx teeth that we can’t see the hex head ¼ inch away. Some people live in that state perpetually. My mother used to refer to this condition as, “Not being able to see the forest because of all the trees.”

Understanding the whole system
The job of a system engineer is to see the whole system. They look at the interactions between parts and groups and make sure that in the end everything works well together and nothing gets missed in the rush to get things done. In the past 25 years I have only worked on one project where there was a system engineer. Most of the time the engineering manager, project manager or the engineer herself will perform the roll of system engineer. If you are in business for yourself and it is just you and the customer, you had better get good at looking at the whole system and anticipating how things work together.

For a time, I worked as a process engineer at a chemical processing facility (yes, I have done some interesting things in my career). I pointed out to my managers that I was an electrical engineer, not a chemical engineer. They responded that sometimes it takes an outsider to see the problem that all the experts miss. What they realized, was that while I was not an expert in the field, I was good at system level thinking and had demonstrated detail-oriented behavior.
We had three input streams and two output streams. These were not all the same size and some were intermittent while others were continuous. Occasionally the last circuit in the system would overflow and make a mess. The field operators hated this and blamed the control room for not watching what they were doing. I took on the problem of understanding why this happened. It took several months of pouring through data, talking to operators, and looking at P&ID’s (that’s piping and instrumentation diagrams) to finally understand what was happening. When I told people, no one believed me. I had analyzed the problem sufficiently that I not only understood why but when. To make my point, I started predicting, hours in advance, that a spill was imminent. By the third time I had accurately predicted an overflow, I had people’s attention.

In a cascading chemical plant, or an electric circuit (or almost any mechanical system), there is a flow. One part of they system affect others. While not quite the butterfly effect, changes in one part of a system can drastically affect the function of another, seemingly disconnected, part of the system. This leads me to the third reason I wanted to talk about mistakes. You must come to understand the system as a whole. You cannot be like the myopic engineer I described above, but must look at how your part of the puzzle fits in with all the others. You must understand how your choices affect other teams or team members. You need to know enough about how things work so that if you’re sending people to the moon and no one is working on a breathing system you should probably say something.
Don’t be afraid of mistakes: Strive for perfection, learn from mistakes, move on.